At 16:42 the rescue alarm was sent to the village of Luxor, Hempfield Twp for a male who had fallen down into a hole in the yard. Crews arrived to find a male who had fallen down a 25 foot hole into an old mine shaft. Rescues 34 & 90 set up for the confined space rescue assignment with Chief 34 taking the command of the operations. Crews immediately began air monitoring and dropping ground pads around the hole. A confined space blower was set up, forcing continuous fresh air down into the hole to the patient, to replenish the oxygen levels. Crews then set up an A-frame with a rope rigging system to lower 2 rescuers into the hole. The 2 rescuers stabilized the patient, placed a harness around the patient and prepared to haul the him via the rigging system. The patient was then lifted the 25 ft up the shaft and into the care of EMS. The 2 rescuers then ascended the shaft and the scene was secured. The patient was flown to a Pittsburgh trauma center for treatment. The extrication was completed in 39 minutes from time of dispatch. Units on the scene: 34, 75, 84, 90 & Hempfield EMA. Units out 2 hours.

×
1 of 302 of 303 of 304 of 305 of 306 of 307 of 308 of 309 of 3010 of 3011 of 3012 of 3013 of 3014 of 3015 of 3016 of 3017 of 3018 of 3019 of 3020 of 3021 of 3022 of 3023 of 3024 of 3025 of 3026 of 3027 of 3028 of 3029 of 3030 of 30
598 entries in the Call history
Structure Fire, Derry Twp
Overnight at 00:55, Engine 34 operated at a quonset hut fire in Derry Twp, 71 District. Crews had a structure full of hay bales and farm machinery on fire. Units out 2 hours.
House Fire, City of Greensburg
Overnight at 02:56 Rescue 34 operated in the City of Greensburg as the RIT company on a House Fire. 1st arriving units had fire on all floors of a 2-story residence. Crews out almost 2 hours.
Confined Space - Below Grade Rescue, Hempfield Twp
At 16:42 the rescue alarm was sent to the village of Luxor, Hempfield Twp for a male who had fallen down into a hole in the yard. Crews arrived to find a male who had fallen down a 25 foot hole into an old mine shaft.
➠
Weather-Related Incidents
This evening severe thunderstorms moved thru the county and kept area fire crews busy for several hours. Crabtree crews handled tree & wires calls, along with an odor of smoke in a residence and a medical assist.
➠
Attic Fire, SW Greensburg Boro
AT 17:21 Rescue 34 assisted as the RIT company on an Attic Fire in 24's District. Units out 1 hour.
Vehicle Accident with Entrapment, Unity Twp
Easter Sunday evening at 20:40, Rescues 34 & 114 extricated 1 occupant trapped in a vehicle that was on its side & up on an embankment along the Latrobe-Crabtree Road. Units out 1.5 hours.
Structure Fire, Derry Twp
At 19:06 Rescue & Utility 34 responded on the Working Fire Assignment into Derry Township for fire in the kitchen of a group of patio homes. 1st arriving units put a quick knock on the fire and were faced with extensive overhaul and smoke throughout the attic spaces of 4 units.
➠
House Fire, Derry Twp
At 01:42 Rescue 34 operated on a House Fire in the Bradenville section of Derry Twp, 71's District. Crews had a 2 story with fire throughout. Units out 2.5 hours.
Weather Related Incidents
Last evening into this morning, Crabtree crews were kept busy with several incidents related to the high winds that swept thru the area. Engine & Utility 34 handled trees & wires down throughout the area, a tree down on a parked vehicle and a natural gas leak in a residence.
➠
House Fire, City of Greensburg
This morning at 09:00 Rescue 34 and neighboring companies operated at a House Fire in the City of Greensburg. 1st arriving crews were met with heavy smoke & fire in a 2 1/2 story residence that was extending to a neighboring residence.
➠
House Fire, Loyalhanna Twp
At 16:25 Engine 34 ran a 2-alarm house fire on the south side of Loyalhanna Twp, 131's District. Initial crews were met with heavy fire in the basement extending into the 1st floor. The Engine crew assisted with overhaul and salvage operations.
➠
Smoke in the Building
At 12:27 area fire crews were alerted to a local bank in New Alexandria for a smoke condition inside the building (77 District) Engine & Utility 34 arrived 2nd due, splitting crews to the roof & interior, assisting with locating the source.
➠
House Fire, Unity Twp 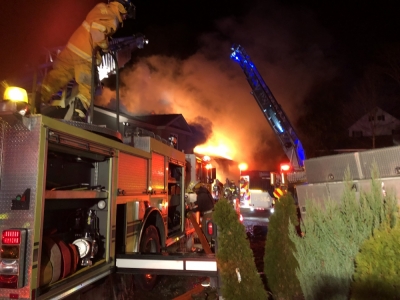 This site has been viewed 615,751 times.
Calls
News
Pictures
Apparatus
Maintained by the members and staff of Crabtree Volunteer Fire Department. Designated trademarks and brands are the property of their respective owners. Copyright © 2006-2022. YourFirstDue Inc. All Rights Reserved. Content on this web site is supplied by Crabtree Volunteer Fire Department. YourFirstDue Inc. cannot be held responsible or liable for any content, text, pictures, or any other media found on this web site.
Management login
Powered by